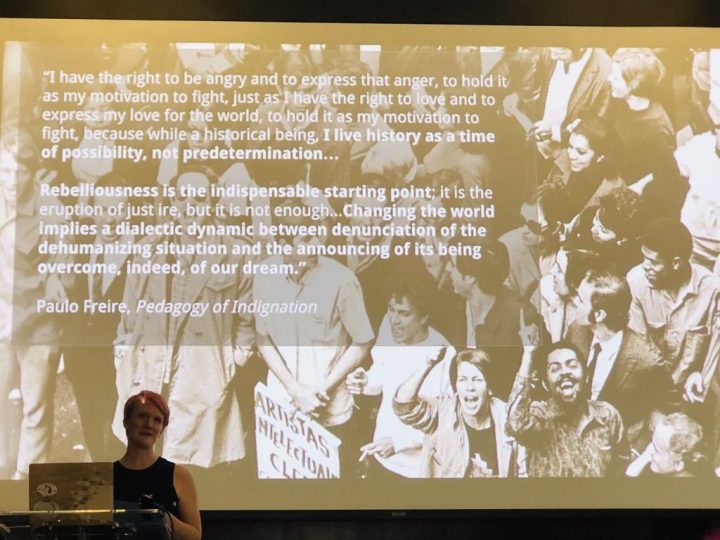 For the Day 2 lunch keynote, Amy Collier talked to us about Ambitious futures for (digital) education: Perspectives from Tropicália.

Abstract: Brasil’s tropicália movement was a revolutionary expression of resistance to authoritarianism and nationalism through art, music, and theater. In this talk, we’ll travel back in time to 1960s Brasil, quaking under a military dictatorship, to explore how the key goals of the tropicalia movement connected to the educational/pedagogical approaches of Paulo Freire. We’ll tap into songs from tropicalia’s greatest musicians (e.g., Caetano Veloso, Gilberto Gil, Gal Costa, and Os Mutantes, etc.) while diving into Paulo Freire’s writings. As we explore those connections, Amy Collier (whose heart still lives in her home country of Brasil), will draw us back to the present moment and point to how the tropicalia movement can be an inspiration for our digital work in higher education. “Seja marginal, seja heroi.” (Helio Oiticica)

More information can be found here.

Amy put together a couple of pages to help with names and places in her talk:

I loved Amy’s presentation of the history of tropicália, the work of Paulo Freire, and how they can inform our current work in Ed Tech. Tropicália was about imagining new futures in the face of oppressive forces, and I think the audience was quick to see the applicability of this history to our own “time of intense polarization.” Amy called on us to embrace Tropicália’s work in inverting the colonizer and colonized relationship to recenter the students in education.

Amy began her story in Salvador, the epicenter of the Brazilian slave trade where as many as 5 million African people were brought into Brazil. Throughout the twentieth century, Salvador has been a center for African-Brazilian culture, and it was the birthplace of Gilberto Gil and Tropicália music.

Tropicália was a reaction to the Musica Popular Braileira, a nationalistic music that rejected American and European influences. Instead, Tropicália embraced anthroprophagia, the cannibalism and remixing of cultures with local inflection. It was in its conception a protest against the nationalistic music culture, the Brazilian bourgeois’s complacency, and the repressive Brazilian military regime.

In her presentation, Amy presented a close reading of the lyrics and music of early Tropicália, pointing out the allusions, satire, and direct challenges to the status quo. At a performance of “É proibido proibir” by Caetano Veloso in 1968, Veloso called out the youth of Brazil, the audience, for the lack of aesthetic taste and their political complacency. The crowd booed and turned their backs on the band, and the band turned their backs on the crowd.

In the March of 100,000, protesters called for culture from the bottom up and a rejection of “high culture” and “finished art.” Amy left unsaid the connections between these protests and our (the audience’s) similar shared beliefs in educational technology from the bottom up as opposed to expensive corporate enterprise solutions and surveillance capitalism in the classroom.

From her history of the Tropicalistas, Amy jumped forward to today, and how Brazilian President Jair Bolsonaro has praised parts of this militaristic regime and is seeking to erase the legacy of Paolo Freire and others that promoted rebelliousness under the old regimes.

Both Freire and Tropicália celebrated what Veloso called “the right to imagine an ambitious intervention in the future of the world, a right that immediately begins to be lived as a duty.” As educators, many of us have read Freire and worked to implement his visions through our work. We need to extend this work from traditional pedagogy to be an explicit goal of our work in ed tech, recognizing the potential for oppression in ed tech.

Amy’s talk was wonderfully interdisciplinary. Because of my own background, I think of it as a history of technology, but she tied together the cultural history of music with the history of education and educational technology. The audience really enjoyed hearing about a culture that most of us knew very little about, and we understood and I think all accepted her arguments for the connections and applicability of these histories to our current work.